On the 6th of March, we were invited by the European Centre for Law and Justice, to come and speak at their event at the United Nations in Genève. Other speakers were the British donor conceived Dr. Joanna Rose and professor Clotilde Brunette-Pons. Our presentations have been recorded and will soon be made available online.

In the meanwhile you can find the text of my presentation here.

My name is Stephanie, I am 39 years old and a donor conceived from Belgium. My mother desperately wanted to have children. Her husband was infertile and they ended up in the private practice of the first Belgian fertility doctor who discovered that a lot of money can be made from the despair of adults longing for a child at least half of their own. In my country donor conception has been officially practiced since the early 50’s. Surrogacy has been practiced since 2003.

My parents got one of the first package deals of the fertility industry: they paid a fixed price for the continuous effort to get my mother pregnant with the sperm of an unknown man. A man who would supposedly resemble my social father so that an illusion could be projected and it would be less awkward for everyone.

My mother needed to take hormones and got inseminated with sperm. In January 1979, my mother gave birth to a set of triplets.

(From left to your right: my sister Sophie, my brother Bernhard and me)

My parents got the advice never to tell us the truth. Pretending became a new form of parenting. Nevertheless, I always felt that something didn’t add up in the family where I grew up in. I had absolutely nothing in common with the man I used to call my father. Yet like any innocent child I yearned for his love and attention, but I never seemed to meet up with his or his family’s expectations.

At the age of 25 we discovered that we were donor conceived. At first I thought it was a bad joke. Firstly: how could my parents, the two adults I trusted the most, deliberately withhold fundamental information from me and lie? But also secondly: how could a doctor enable such a kind of practice merely out of financial gain and a bit of fame? And thirdly: how could someone part from his own flesh and blood, abandoning them by giving them away to complete strangers?

I went through an identity crisis. For over 25 years I had wrongfully reflected myself to a ‘father’ and a family I didn’t descend from. From a false identity, I went to half of an identity. Instantly I was curious to know who my actual biological father was. It is very strange to realize that there is someone out there with whom I share half of my being, someone who exists because I exist, someone I truly miss having in my life.

He is important to me yet others have decided that I (and he) are not allowed to know one another. The same goes for the many (ten to hundreds) halfsiblings we could have all over the world.

We started our search but we were instantly blocked. We weren’t allowed, files were destroyed, many told us we just need to be very grateful to be alive and keep quiet. And for a while we did keep quiet.

There is always a point of no return. And that point for me was reached when I became a mother. 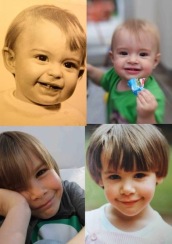 Being able to reflect for the first time on another human being made me realize that my heritage and ancestry matter. It’s a fundamental part of someone’s identity, this shouldn’t be up for a debate.

Knowing the family where you come from is important for anyone, the same goes for having access to your own full medical history, so why shouldn’t this be automatically allowed for donor conceived or children through surrogacy?

If we are not granted that fundamental human right, we are just commodities enabling adults to create restricted frames or families as they call it. We need to realize that it goes at the expense, interest and welfare of current and future generations. The implications upon us, the children, are much too big to deny or ignore any longer.

In my country, back in 2012, there was nothing for donor conceived to turn to. So, I started an organization enabling DC to connect, I reached out to parents and donors, but I also did a lot of research on the industry, legislation, lack of regulation, and got connected with independent specialists like professors in ethics, geneticists, lawyers, politicians … my country is on the verge of realizing that current legislation not only discriminates but also fundamentally harms the humans it tends to create.

It’s a fierce fight, because we are fighting against the multimillion dollar lobby of the fertility industry. Most of the governmental organizations that get funding and should advocate for the rights of all children, lack the commitment and guts to represent us correctly. Not wanting to wait anymore for others to finally to their job, we took our fate and rights into our own hands.

In May 2017, a first European DC succeeded in tracing her anonymous biological father.

This is a picture of her: Emi Stikkelman. She was able to find him through DNA testing with international DNA databanks. Because you see: the key in finding our unknown biological family lies in our DNA. And we got plenty of it.

Emi had a DNA match with a distant cousin. She knew it was a match on her father’s side. So, she started to build the family tree of her DNA match and could figure out the branch where her father was hanging.

With five other donor conceived she founded the organization Donor Detectives. 4 of us come from The Netherlands, 2 from Belgium. We are a non-profit organization. We try to help and inform those who want to look for their biological family: donor conceived, donors, legal children of donors, parents, …

The numbers are clean cut, but behind them there are stories of great complexity, disenchanted grief, deeply affected lives… Donor conceived have to deal with all of this on our own with no professional help because those responsible are getting a free pass in accountability.

DNA doesn’t lie and provides us finally with answers. But we are also uncovering the actual lack of morality and ethics of the industry. For example: limitations in the amount of DC were ignored, sperm of unhealthy men was used, and some doctors even used their own sperm… these findings also add up to the collateral damage donor conception and surrogacy causes.

I uncovered through DNA testing that my triplet sister has another biological father than our brother and me. The fertility doctor used a cocktail of different sperm samples. He must have thought that it was a good idea. He didn’t even inform my parents about it. It proves to me that he couldn’t care less how it would affect us: the children. Our integrity and dignity have been and are violated.

I urge you policy makers to take your responsibility and begin to realize that by allowing and facilitating the mass production of children without considering and protecting their fundamental basic rights, interests and welfare, you àWE fail short as a society.

And I also want to urge you in trying to fund DC organizations or at least give us of voice and correct seat at the table when our interests are being discussed. You should owe them that much.

Thank you for your attention.

3 gedachten over “Our speech at the United Nations in Geneva”